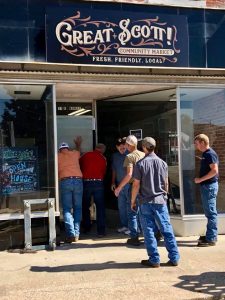 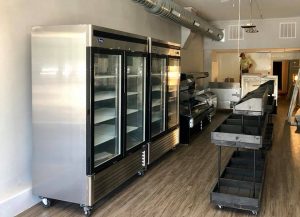 After more than a year without a grocery store, community residents in Winchester (population 1,500) grew tired of the half-hour drive to Jacksonville to buy groceries. In March 2017, the Winchester Civic Group invited Illinois Cooperative Development CenterManager Sean Park to speak at a community meeting to gauge interest in a cooperative grocery store. More than 100 people attended the meeting and several people signed up to take part in a steering committee that would pilot the project.

Because of his knowledge of cooperatives and his decade-long experience managing and owning a grocery store in Rushville, IL (population 2,900), Sean Park was exceptionally suited to support this project. Sean made more than 20 trips to meet with the steering committee members, first explaining the basics of a cooperative, the process for forming one, and the business component of a grocery store.
Sean cautioned the steering committee that if the group merely duplicated the business plan of the old store, the new store would likely fail. Instead, a new business plan was developed so that the new store could compete with other stores.

First, since a nearby dollar store carried many dry and frozen products at a lower price, the new s tore would carry fresh produce, meats, and dairy. Second, since “ready-to-eat” foods are the fastest growing segment of the grocery business, the new store would include a small deli with these options available. Third, the new store would purchase produce, meat, and other goods from within a 50-mile radius of Winchester — thus limiting distribution costs, providing fresher and healthier foods, and offering economic benefits to the region’s farmers.

Many volunteers helped with the remodeling of the building and the installation of new equipment.  Local investors provided the necessary financing.  It was truly a community effort.  According to John Conrad, President of the Great Scott! Community Market, “with the help of Sean Park and others at the Center, our grocery store has progressed from a good idea to a good idea backed by a solid business plan, to obtaining capital investment, and to, as I write this, being within a couple weeks of providing a community of 1,500 with its only grocery store.”